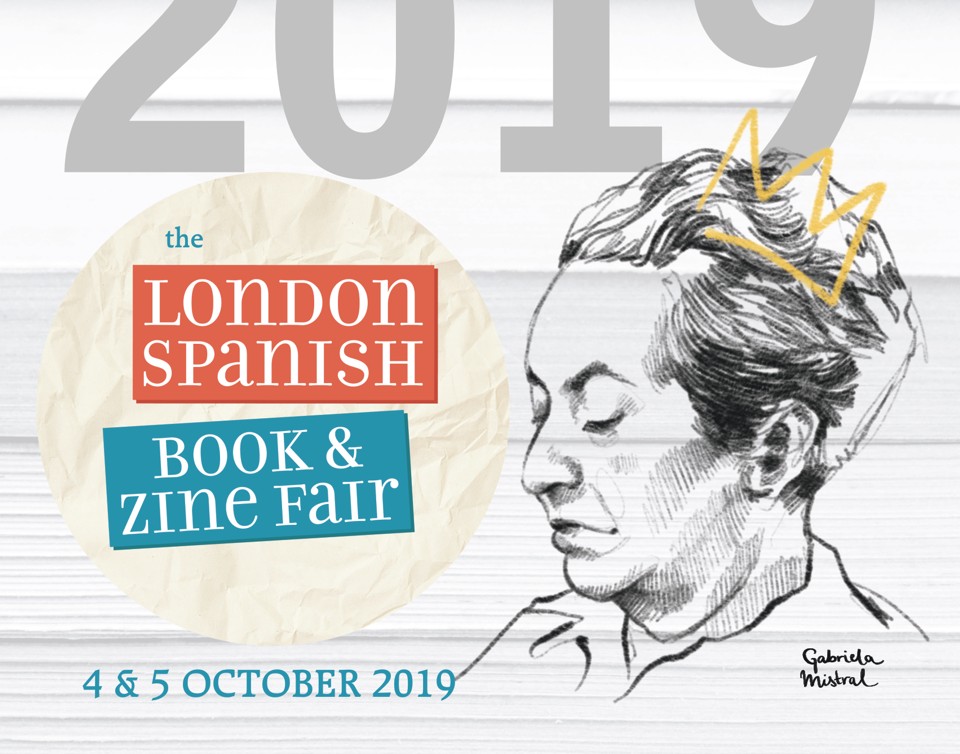 The book fair is free but you must register previously.
We also suggest to reserve space for the Workshops
(See links after any presentation or workshop)

The Fair opens at 2 pm on Friday 4th October.

‘The situation of Spanish speaking writers in the UK’. (La situación del escritor hispanoparlante en el Reino Unido)- Round table with  Enrique Zattara (El Ojo de la cultura Hispanoamericana) and writers Gunter Silva, Chloe Aridjis and Ana Vidal.
What is the reality of writers who live and work in a linguistically foreign environment? What is your relationship with the market and the British literary field? Is the Spanish-speaking author doomed to isolation or cultural ghetto?
(In Spanish) Follow updates on Facebook| Eventbrite

‘In conversation with Julianne Pachico’, presented by Silvia Rothlisberger (Literary South).
Julianne Pachico was born in Cambridge, England in 1985 and grew up in Colombia with her family until 2008. Her short stories have appeared in literary magazines like The New Yorker. Her short story collection The Lucky Ones has been published in England, France, Italy, The Netherlands, USA and Colombia.
Julianne Pachico will be in conversation with journalist Silvia Rothlisberger (Literary South – Flawa Festival) about her book of short stories The Lucky Ones set in Colombia between 1993 and 2013—the peak years of violence during the long Colombian conflict —this jigsaw puzzle of a book centres on a group of wealthy girls, the daughters of expats and local elite, and the teachers, housekeepers, warlords, and guerrilla fighters who surround them. This event is in English and it will be recorded and broadcast on Resonance 104.4’s show Literary South
Follow updates on Facebook | Eventbrite (In English)

‘Cartonera Publishers in Latin America’.With Dr. Lucy Bell and Dr. María Soledad Montañez (University of London).
This talk will introduce the audience to Cartonera Publishing, a literary phenomenon that emerged in Latin America in the early 2000s. Cartoneras take their name from the waste-pickers who supplied and still supply discarded cardboard (cartón in Spanish) for the creation of unique hand-made and hand-painted books. Working at the intersection between literary production, artistic practice and community action, there are now more than 250 cartonera publishers throughout Latin America and beyond – thus outnumbering the imprints of publishing giant Penguin Random House. (In English)
Follow updates on Facebook| Eventbrite

‘Literary Travel in the Low Cost Era’ (Viajes literarios en la era de los viajes low budget) with writer and journalist Alejandro Luque and writer and translator Andre Edwards.
On the occasion of the launch of the English paperback edition of ‘Borges in Sicily’, the book’s author, Alejandro Luque, and its translator, Andy Edwards, will talk on the theme of literary travel and its evolution in the era of ‘low cost’ flights and other forms of mass tourism. What meaning has the act of travelling and narrating a journey now acquired, what stimulus moves writers of this genre to bring their projects to fruition and what is the future of this discipline? These are just some of the themes Luque and Edwards will discuss in a talk that will encompass their passion for the Mediterranean and, especially, Sicily. (In English)
Follow updates on Facebook| Eventbrite

The official launch of the book and zine fair takes place on Friday 4th October at 6. 15 PM with live music by Corina Piatti at the MAIN HALL.

The Fair closes at 7 pm on Friday 4th October.

The Fair opens at 11 am on Saturday 5th October.

‘Literature and Women in Spain in the XXI century’ (Literatura y mujer en España en el siglo XXI) – With Spanish writers Marta Querol and Marina López. The writers will review the narrative, editorial and reading trends in Spain over the last two decades and the role of women writers. They will start with the evolution of literary trends since the end of the 20th century to nowadays and their influences on the current literary landscape. In a second section, they will briefly present the main literary genres written by women, editorial claims and reading customs actually living in Spain. (In Spanish)
Follow updates on Facebook| Eventbrite

‘In conversation with Dolores Conquero’. Dolores Conquero is a Spanish writer and journalist. She’s a regular contributor at El País. Her non fiction collection of tales, Amores contra el Tiempo, is published by Editorial Planeta. Presented by Concep Díaz Pérez (La Tundra), Dolores Conquero will sign copies of her book after the talk.
Follow updates on Facebook| Eventbrite (In Spanish)

‘The independent comic in Latinamerica’ (El cómic contemporáneo en Latinoamérica) – With Costa Rican author Edo Brenes – Author published by Reservoir Books.
Edo Brenes will talk about the artists and the currents that have marked the comic in recent years to Latin America and Costa Rica, from the underground, through the independent, to publishing works in major publishers. Edo will discuss topics such as the rescue of the Latin American artist made by the publishing houses Musaraña Libros and Editorial Municipal de Rosario (Argentina) in his short comic book compilations; international competitions such as the Central American Cartoon Competition organized by the French Alliance of San José, with international projection towards Europe and France in particular, and the search for talent by the literary novel of graphic novel The Nicolas Grivel Agency, France.
Follow updates on Facebook| Eventbrite (In English)

‘From self-publishing to the Mainstream in 3 years’ (De la independencia al mainstream en tres años) – With Murnau Den Linden
Spanish artist and author Murnau Den Linden shares his views through his personal experience, on what to do to build a career, from being an independent creator to work in the mainstream markets with a global publishing company and a team dedicated to your works. ‘From self-publishing to the Mainstream in 3 years’ is not a bunch of tailored solutions to success as an author, but an honest chat with someone who tries to put some light into the fears of any-age-creators, helping them to tear down barriers and cliches in a world where everything’s new and unknown, full of chances and possibilities.
Follow updates on Facebook| Eventbrite (In English)

‘The Bilingual Writer’ – With Isabel del Rio (Friends of Alice Publishing) and authors Juana Adcock, Leo Boix and Karina Lickorish Quinn.
Do bilingual writers feel that they have a separate identity for each of their languages, or do they identify with one language more than with another – ultimately, can a bilingual writer have a fluid sense of linguistic identity? How do the speakers work with their two languages, and is each one used for a different genre, set of emotions, personal stances, and so on?  Is Spanglish the future for English/Spanish writers, and if it is, does this mean that monolingual readers are going to be purposefully and increasingly excluded? These are just some of the topics the four bilingual writers will discuss in this talk.
Follow updates on Facebook| Eventbrite
(In English)

End of Fair with a set of songs by Flora Frete.

The programme is completed by a wealth of practical workshops to encourage visitors to try out their hand at writing their own stories and poems.

3.30 to 5.15 pm
‘Living in Diaspora’ – Zine workshop by The Feminist Library Spanish Book Club. (Viviendo en la Diáspora. Taller de Fanzines por el Club de Lectura de Feminist Library).
The migration and diaspora topics crosses us to all those who from different parts of the world have made UK our home and English our second language. Some writers and no binary people have reflected on migration, borders, territories and displacement, leaving in books, arts and creativity resources some ideas to give voice to own narratives. The Feminist Library Spanish Book Club invites you to the “Living in Diaspora. Zine workshop” to share creatively our own narrative as m grant people in the Spanish-speaking diaspora and other native languages in the UK.
Follow updates on Facebook| Book this workshop Eventbrite

‘Create a mini story based on other cultures’ (Crea una mini historia basándote en otras culturas) is a family- friendly workshop, facilitated by Mabel Encinas-Sánchez and Marijo Alba-Sánchez. Based on the reading of the book I am Adila from Gaza (Victorina Press), this workshop will encourage children (and their families) to writer their own stories. The activities will scaffold the writing and illustration process for all participants. Come and create your own mini-story!
Follow updates on Facebook| Book this event Eventbrite

‘Your memories are poetry’ (Tus memorias son poesía) with Isabel Ros López and Denisse Vargas Bolaños, members of the collective, Las Juanas.
In this practical workshop, open for all, we invite you to explore a way of drawing inspiration from a memory:  a person, a place, an event, etc. During this session there will be some exercises and activities designed to ignite your creativity. Sharing your work is highly encouraged but not compulsory.
Please bring an object that has a personal significance or a special meaning to you, a memento: a picture, a book, a piece of clothing, … something that reminds you of someone or something.
Follow updates on Facebook| Book this workshop Eventbrite

‘How to build a fictional character based on women of the Latin American Independence‘ (Cómo construir un personaje basado en las mujeres de la independencia de Latinoamérica) with Patricia Díaz (London College of Communication).
Due to the recent commemorations of the Bicentenary of the South American wars of independence from Spain, writers and readers, have been presented with a prolific production of historical novels, some of which included women characters. In this workshop, we will explore questions around the construction of heroines of the wars of independence as characters, the problematical of their position as subjects “outside” history and their political ideas.
Follow updates on Facebook| Book this event at Eventbrite

‘Flash Fiction. Less is More’ with Dominican writer Karlina Veras.
In this 45-minute workshop we will explore the Flash Fiction genre, its value in modern literature, what differentiates it from other forms of writing and how to get prompts and inspirations which you can turn into a 500 words story or less. You will learn how to write compelling stories through fewer words and use silence in the narrative to your advantage. By the end of this workshop you will have produced the first draft of your own flash fiction story.
Follow updates on Facebook| Book this workshop Eventbrite 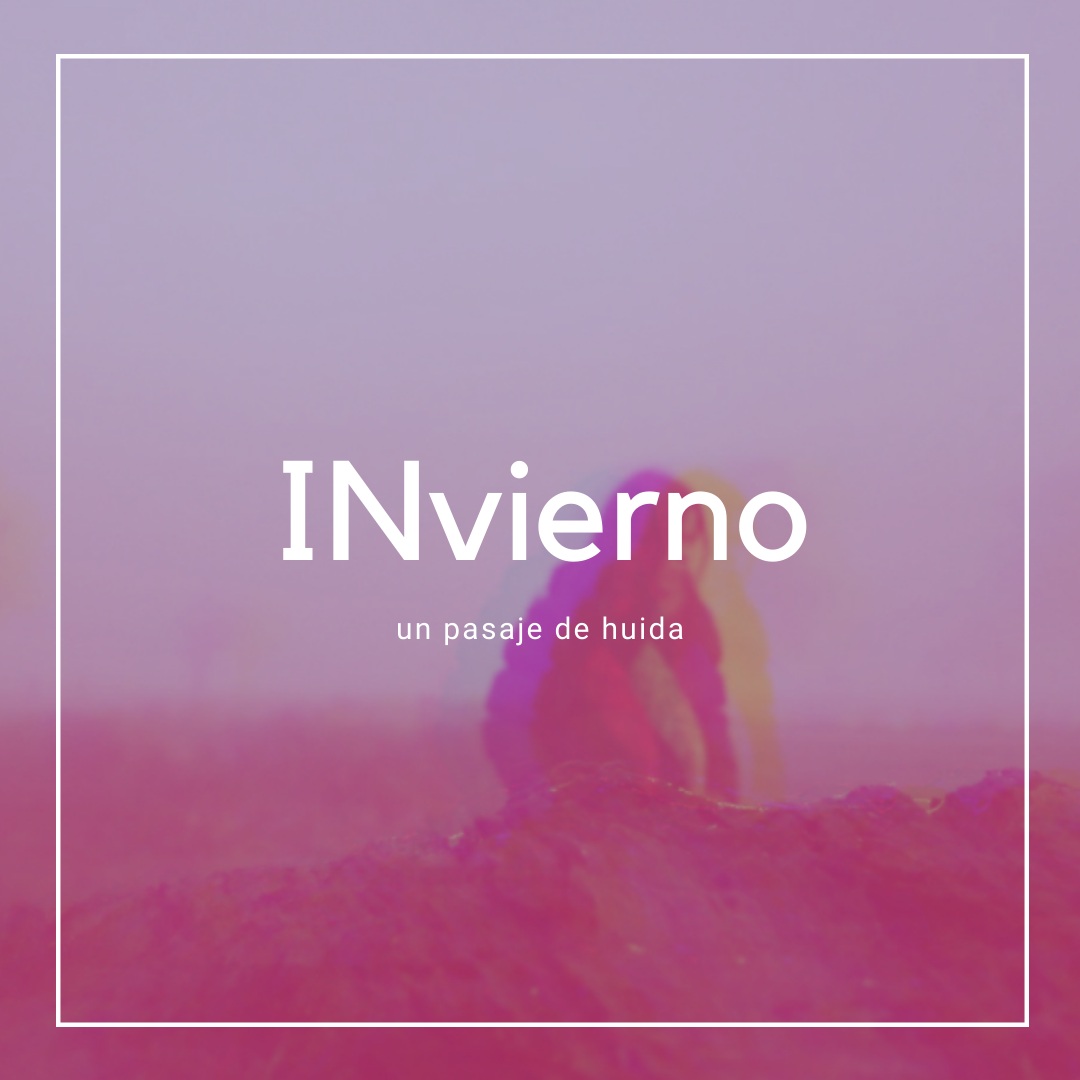 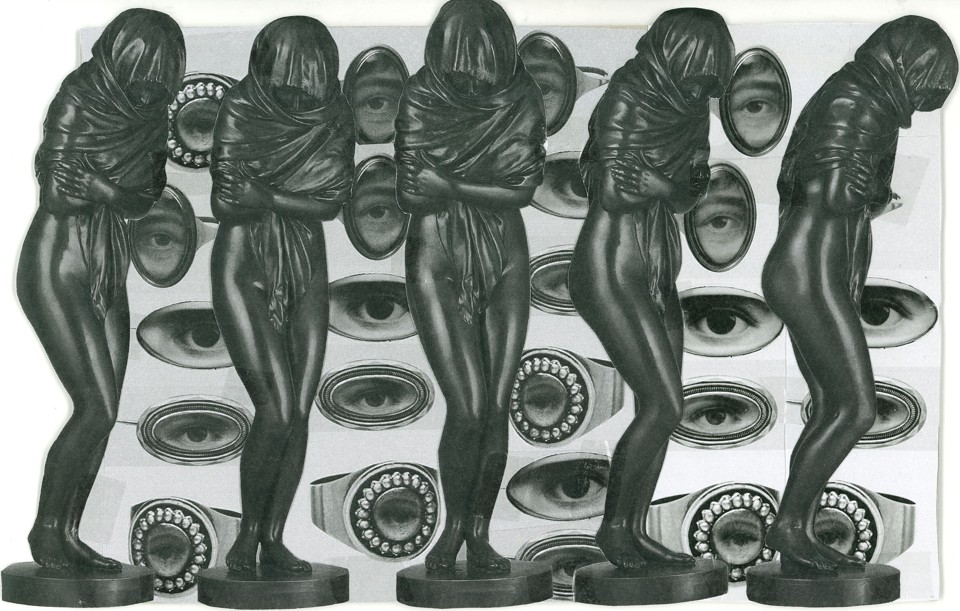 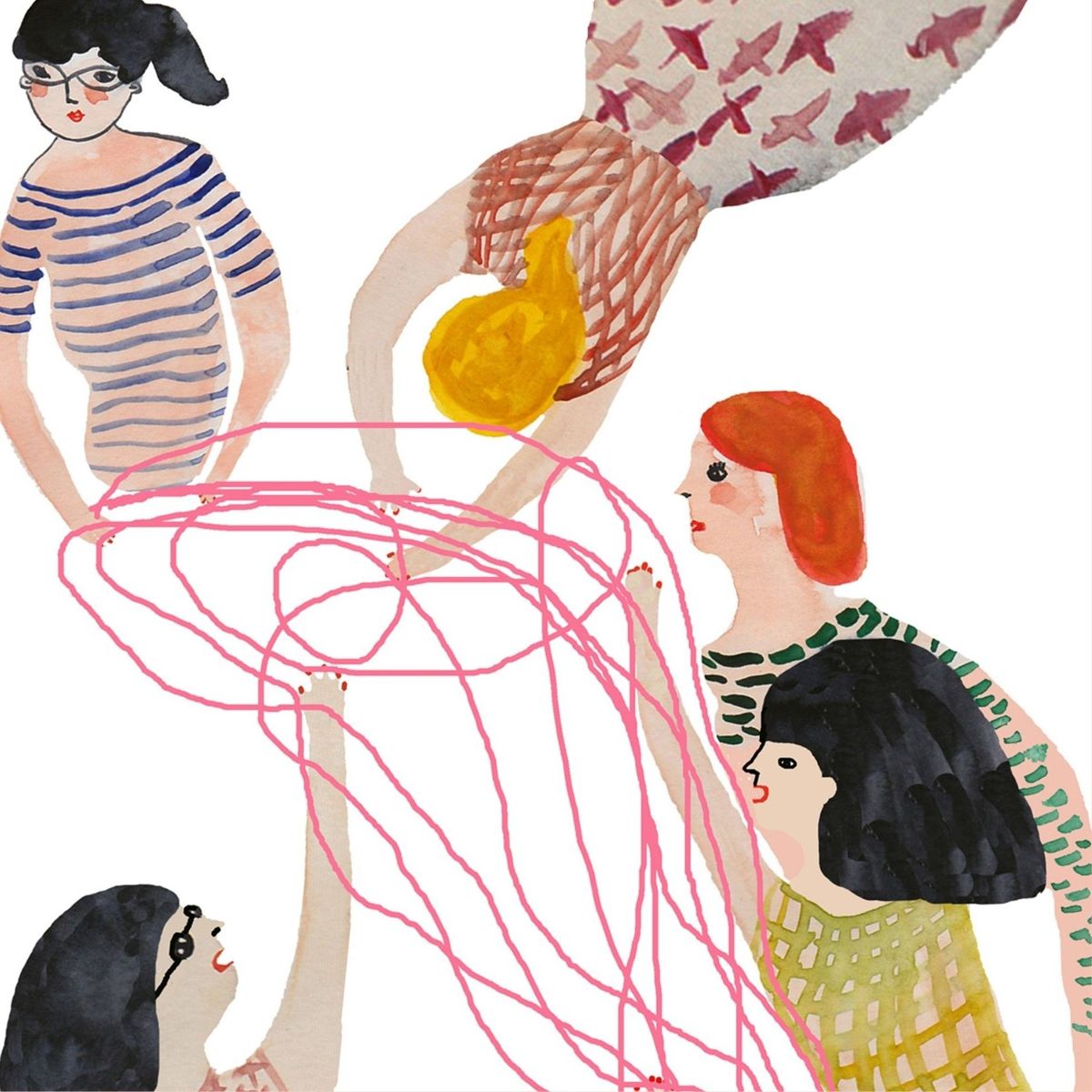