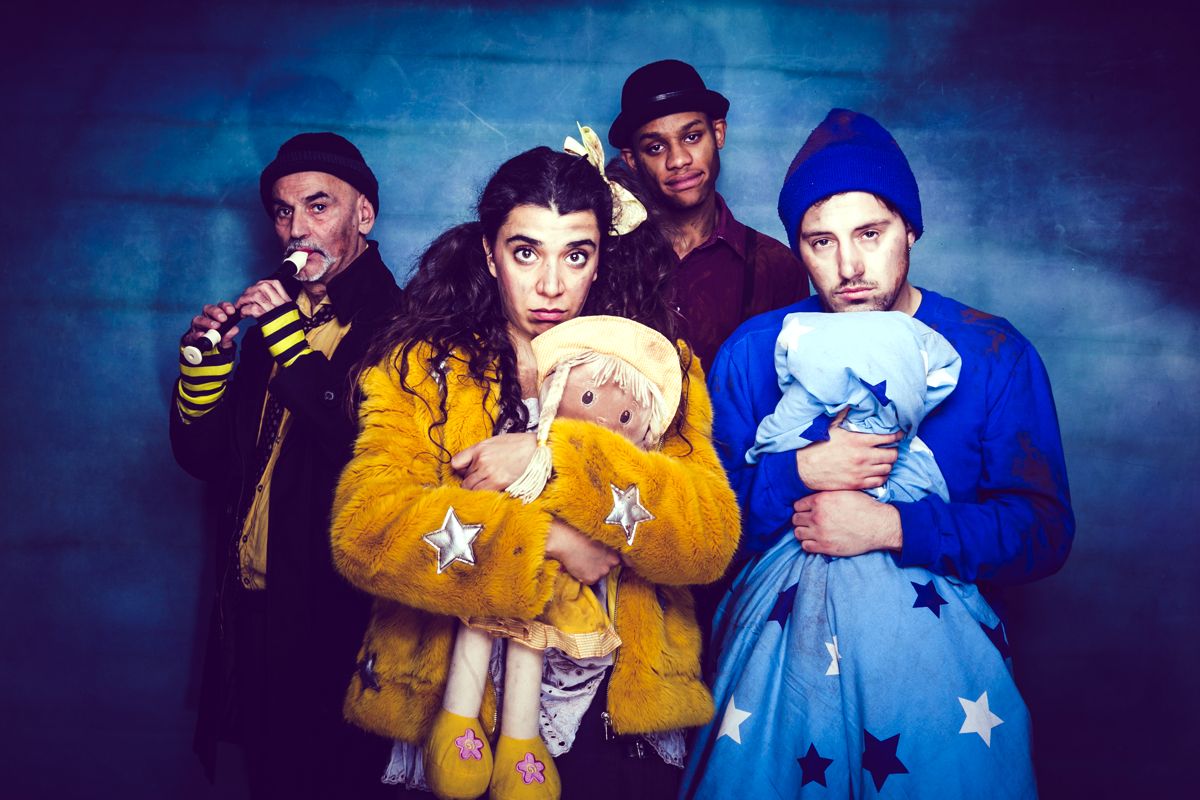 Gobo Teatro presents its first project as a company at the Barons Court Theater: El triciclo, a play by Fernando Arrabal.

Stairs down the venue await us. Ceremonial prelude that seems, beyond the descent, the sinking to the depths of our subconscious. A preparatory procession that will not be misled in front of the text that Gobo Teatro presents tonight corresponding to the lucid Fernando Arrabal: The tricycle.

By Nazan L. Bamio
Read this article in Spanish

Once inside the Barons Court Theatre, the vaulted space prompts us of those ancient catacombs that could have been the refuge of our deepest stories. And, as preserving those intimate encounters, the audience surrounds the stage a few centimeters away on three sides. Already resting in the seat and waiting for the beginning of the theatre spell, a piece of flamenco music beats, as a climax to this voyage, wanting to soon let our instinct fly, thus completing our initiatory journey.

The tricycle challenges our reasoning as soon as the play begins, through impossible competitions or situations with completely absurd results and motivations (understood the absurd concept within the genre and not as qualifying), so characteristic of the Arrabal theatre. A script that provides an immense depth in which we have to open all our senses to properly comprehend beyond the dialectical process the events that occurred. The four cast actors are guiding this trip: Ryan Yengo, Tom Patrick, Lakshmi Khabrani and Jerry Ezekiel. This cast plays, respectively, the four characters involved in the role of Climando, Apal, Mita and The Old man with the flute. Four characters who do not give up their efforts to understand and be understood in that Kafka style society where they have lived. Four outcasts who have been understood by the world but who have been uninterested in understanding the world.

It would be pagan work to transcribe the fable of the play since, as the understanding resides in the gaps between words. But I think it will help the audience to generate a framework: The tricycle narrates the story of two vagrants, Climando and Apal. They must pay the last installment of the tricycle with which they make a living walking the children at the park. An apparent stroke of fortune occurs when the man with the bills, a wealthy person with a motley wallet, makes an appearance. Faced with this opportunity, Mita and Climando do not hesitate to slay him to obtain his money after Apal’s instructions. Act that of course will have consequences in the future of this odd group.

After this seemingly «naive» plot, a multitude of questions are hidden about death, destiny, authoritarianism, marginality, poverty … Therefore, the difficulty of the staging lies in reaching all this layer of doubts, hidden behind the words enunciated by the characters. We constitute this deep dimension through the tone, code and style of the play. These approaching allow us to dive into the subconscious without prejudice, but with handles.

In certain moments the acting approaching aids us to forget about reality delving into that deep language thanks to an exaggerated gesture of the actors, even caricaturesque, that at times reminds us of the clown’s modes and making us to understand something more than the spoken words. Although, in other moments, reality appears too naked without these interesting interpretative games.

A significant success of the director, Jesús Chavero, because has been his decision to represent the character of the Guardian with a sign with the word Police written on it. Combining in this decision the most Arrabal style when granting the factual power of the civil order not to a person, but to a poster with a written word and generating in the actors the comparable level of intimidation and reactions as the person itself. This also causes the public to fly beyond the apparent reality. Another characteristic of the style decided by Jesús Chavero for the present staging has been to provide the text with a more emotional and poetic character. Both with the selection of the sound space and with the resolution of the end of the first act where rose petals stained the stage as the blood of the murdered character.

Predominantly, we note a play that presents some remarkable acting where the gestural construction executed by Ryan Yengo stands out. A proposal with a clear direction in his movements as well as a successful characterization. Thanks to their costumes the characters become spots with colour giving them greater expressiveness. With the play completed and once the spell of the theatre was over the stairs waited for, on this occasion, to be climbed and to return to the imperishable realm of reality. Once in the street, and with the rapt gaze on the material, a wink of hope was returned to me. Luck that, in the sky, the moon still shone.