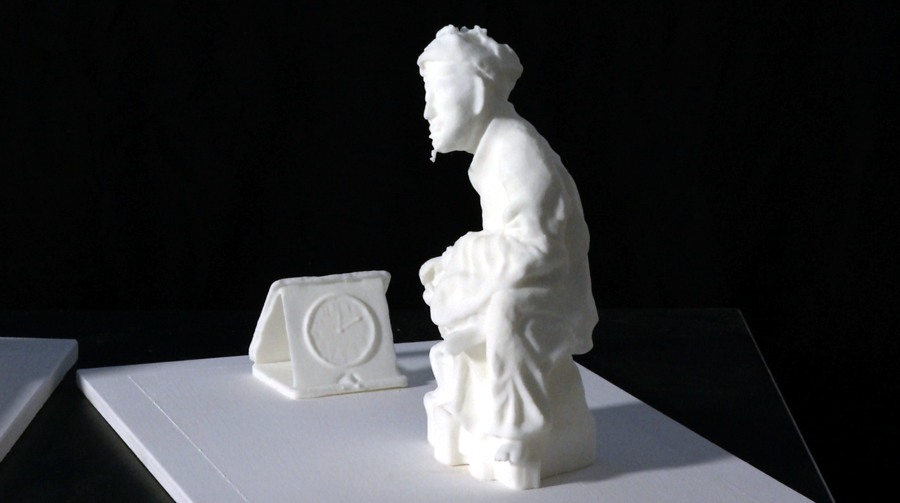 The purpose of art is to incite reflection and, sometimes, to revive the hope that exists within each one of us. Using the story of Freud’s emigration from Vienna to London in 1938 as a starting point, the short film The Hope, by Emmy Award winning filmmaker Susan Steinberg, highlights the significance and importance of objects for those who are forced to flee their home.

These objects can be seen as touchstones that represent the different layers of memory. To emphasise this idea, the English artist Paul Coldwell made three-dimensional copies of the objects and antiquities on Freud’s desk in London which provide a visual counterpart to the great narrative of loss, presence and absence.

At the same time, Paul Coldwell borrowed from the Freud Museum in London the coat that Freud purchased for his emigration to England and took it to The National Gallery where the coat was X-Rayed and examined as if it were a relic or a masterpiece.

Part of Paul Coldwell’s exhibition is also the documentation of the art action that was carried out in collaboration with students of the «Business Academy Donaustadt» in Vienna, June 2016. The purpose of this art action was to visualise and reflect on the dangers and traumas inherent in forced travel and immigration.

The short film by Susan Steinberg documents all these unique events showing us the process of restorative transformation of art, along with the regrettable recurring feature of history. This production was supported using public funding by the National Lottery through Arts Council England.

In Vienna, filming included never-before-seen images of Freud’s private rooms, interviews with the director of the Sigmund Freud Museum in Vienna, Monika Pessler, and the artist Paul Coldwell, who guides us in this emotional process of creation and transformation.