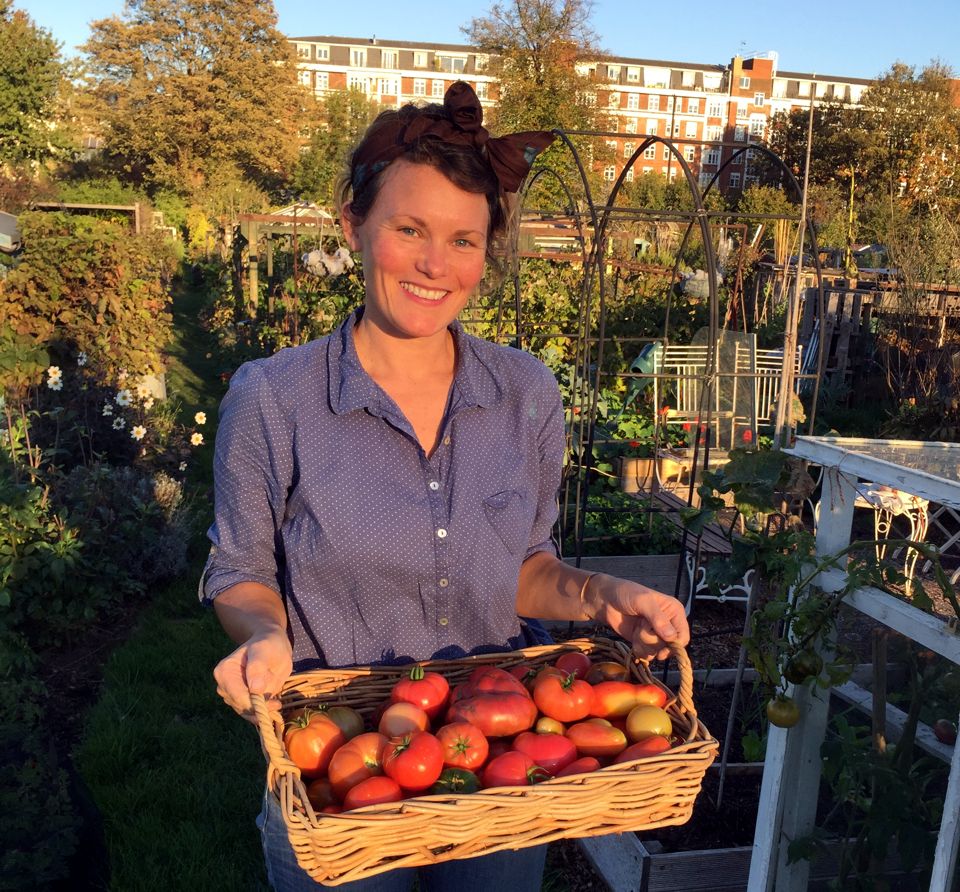 "What I like the most about the allotment is how calm I feel when I'm there. It's as if my mind is cushioned. For me, it is a place where I can be completely present, a way of doing meditation that allows me to be a better version of myself. Growing fruit and vegetables is a delicious bonus."﻿

This is how Samantha Miller describes her relationship with her allotment. The term comes from the verb ‘allot’: ‘to assign something’. Although it is said that allotments have existed in the United Kingdom since the Anglo-Saxon period, it was during the industrialization of the nineteenth century that the current rental system of plots was developed so that workers with fewer resources could grow their own food. At the beginning of the 20th century the plots began to be legally protected, and at the end of the First World War they were made available to all citizens. For this reason, the noun allotment means both ‘assignment’ and ‘rented garden’. It is currently estimated that in the United Kingdom there are about 330,000 plots for rent and that the waiting list reaches 90,000. The cost varies approximately between 45 and 97 pounds per year, depending on the size and area.
Samantha Miller – interior designer, design teacher and yoga and pottery enthusiast – is one of the lucky ones who has shared with her partner Scott a plot in an allotment in the heart of London for more than three years. With deep gratitude she acknowledges: «It is now a fully necessary and treasured part of our lives.»

The gratitude that Samantha feels motivates her to share her experience to inspire others. She encourages anyone who is reasonably interested in growing their own food to start doing it as soon as possible. «It’s the kind of hard work that leaves your cheeks bright and your heart full. Since we have had the allotment, my relationship with gardening has deepened, as it requires more weekly care than the garden of our house. Paying attention to the changes that occur in the seasons, what the skies are doing, how these things affect the plants, is very useful and deeply satisfying», she reflects.
Samantha is not alone in acknowledging the emotional satisfaction working in the outdoors can provide.

There is a wide variety of nature based activities deemed so beneficial in treating certain physical and mental health problems that some doctors are already «prescribing nature» to many of their patients. This cultural change is reflected in two recent reports published by the King’s Fund (a charity that works to improve health in England and Wales): ‘Gardens and Health’ (2016) and ‘Social Prescribing’ (2017). Research conducted by the paediatrician and founder of The Center for Nature and Health Nooshin Razani (University of California, San Francisco) suggests that access to nature can prevent and treat chronic diseases thanks to the positive effect community experiences in nature – which promote social relationships and physical activity – have on the reduction of stress and isolation.

There are also numerous studies that show that therapeutic horticulture can have benefits for mental health.

Respect is a key part of this restorative community experience. Respect for neighbors and for wildlife is part of the fundamental philosophy of these urban gardens: «Our allotment has rules on how you should take care of your plot and what is considered appropriate growing. I think they are fair and they make sense for our area, although I would love it if we could also have chickens!» says Samantha. «There are resident cats, foxes, river rats and innumerable bugs and insects. We expect that a portion of our produce will be nibbled on by these beasties. The insects especially do their bit, so they deserve a snack or three»,she says smiling. She continues: «Organic farming means not using chemicals. I think doing it this way is more sustainable and keeps us in a closer and more direct connection with the amount of energy needed to grow and to produce food. Organically it means less but better, it means being attentive, grateful and less inclined to waste.»


It’s the kind of hard work that leaves your cheeks bright and your heart full. Since we have had the allotment, my relationship with gardening has deepened

Samantha also comments on the benefits of companion plants: «It can be an extremely useful way to control pests. In our plot I would like to introduce more herbs, both for their repellent powers and for their culinary uses. That said, we plant nasturtiums each year to lure black fly away from our beans, and sometimes it works!»

Regarding the feeling of belonging to the community of urban gardens, Samantha says: «I feel our community is diverse and welcoming, and it also has its quirks!” Samantha would love to see open access promoted to all members of the local community: «I think we would all benefit from their support. Also, when we are part of something bigger than ourselves, we feel a lot better.»

There are many people of different ages, races, cultures, religions, beliefs and social origins coexisting in our large cities. In the schools of London, for example, it is thought that around 300 different mother tongues are spoken. How can we negotiate our own space with our differences, the speed of daily comings and goings, the trains, buses, roads and streets, when we barely have time to pay attention to the trees that purify our air? A fundamental aspect of courage is to be oneself, and nature is undoubtedly our best ally: the poet and researcher Stephen Harrod Buhner wrote ‘nature does not know how to lie’.

Perhaps the experience of growing one’s own food could be a door to connect us with that wild and enterprising side of ourselves – a side we need to explore in order to express our deepest feelings. Samantha Miller concludes: «I feel braver as each year passes. Not just because I know more, but because I realise too that even with my growing knowledge, forces larger than me can either dash or exceed hopes. The allotment has taught me patience, humility and acceptance.»

How to apply to rent a plot in an allotment in the United Kingdom: Gov.uk